As one of the top selling products, with more than 100 units sold, the DR10 has been around since the beginning of TruSteel. It’s easy to use, and the affordability is unmatched. For those of you still researching and learning the process, the DR10 decarboxylates and devolatilizes your “crude oil.” This means it removes the carboxyl group of the cannabinoid molecule in the form of CO2 and water vapor. In simpler terms, this process actives the cannabinoids for topical or edible use by converting the acidic form (THCa for example) into a neutral form. This affects the thickness of the product, and certain cannabinoids will only crystallize in one form versus the other. Decarboxylation reduces the vapor pressure of the cannabinoids, which is crucial for post-processing in a wiped film evaporator. The heat also will remove residual solvents left over from the solvent recovery step and should yield a product that tests ND (none detected) for solvents and acidic cannabinoids. 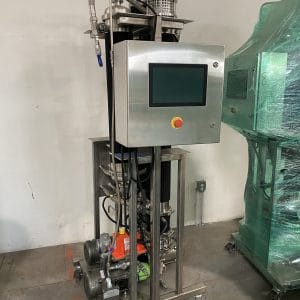 FEATURED
ACTIVE
$199,999
The AV30 adds full automation Allen Bradley system as well as a more compact package over the AV15. It is the most efficient solvent recovery system on the market when comparing throughput to footprint. 13 points of data measurement combined with built in fail safes, alarms, data logging, and remote access makes the AV30 stand…
Lab & Extraction

Company
About Us
Why 420 Property?
Pricing
Exclusive Advertising Opportunities
HELP & FAQs
Blog
INSTANT OFFERS
Recent Blogs
This Listing is available to PREMIUM Subscribers only. Please login or register for a premium account below.